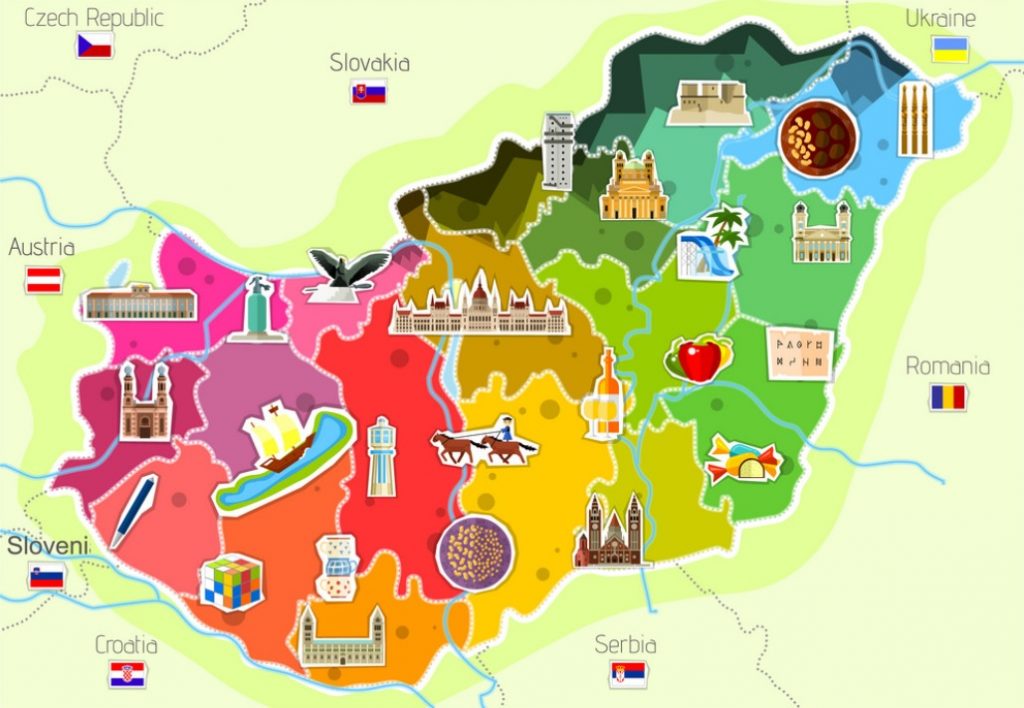 From Hungary’s capital city of Budapest to its many quaint villages and fantastic scenery, the country evokes a strong sense of history and tradition at every turn. There are 19 counties, each and every of them showcasing stunning sights and attractions. With this brief list, we would like to highlight the most outstanding ones and give you some insider facts about them.

The capital, Budapest, is one of the most culturally important metropolises in Central Europe and is home to numerous UNESCO World Heritage Sites. Although humans have lived here since the Stone Age, this beautiful city only formally came into being in 1872 with the amalgamation of three previously independent towns—Old Buda (Óbuda), Buda, and Pest—to become the administrative, commercial, and industrial center of Hungary. There are countless attractions in the city, and it is impossible to list them all. The Buda Castle, the Parliament, St. Stephen’s Basilica, the historical thermal baths, Széchenyi Chain Bridge and Heroes’ Square, just to name a few. Here is a more detailed list, if you would like to explore more: https://theculturetrip.com/europe/hungary/articles/15-must-visit-attractions-in-budapest/ 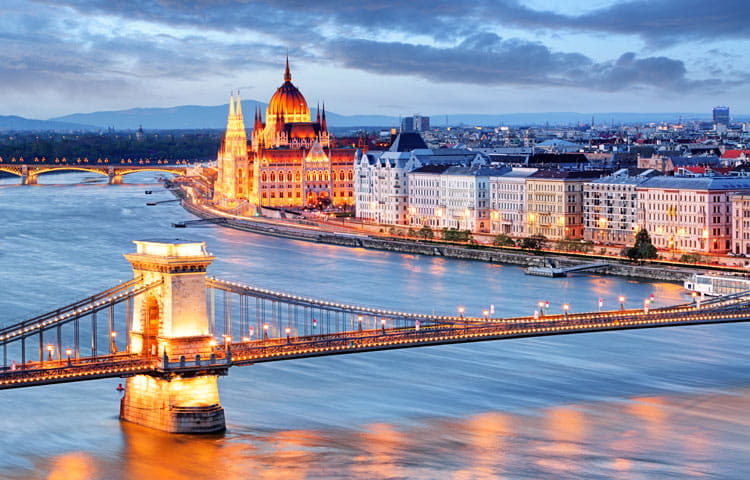 Szentendre: Not far from the capital, lays Szentendre, a town which is famous for its art, galleries and museums. The romantic atmosphere is guaranteed on the cobblestone streets. An open-air village museum can be found here as well, you can read more about it HERE. Tip: Visit Szentendre by boat from Budapest for a peaceful journey on the river Danube. 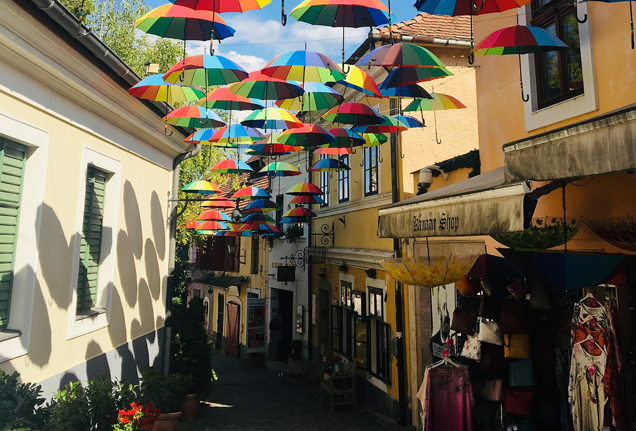 Visegrád: It is a small castle town north of Budapest on the right bank of the Danube in the Danube Bend. It is famous for the remains of the Early Renaissance summer palace of King Matthias Corvinus of Hungary and the medieval citadel. The royal residence has now been reconstructed and is open to visitors who can discover exhibitions outlining the building’s history.

Esztergom Basilica: Dominating the skyline of one of the oldest of Hungarian towns, Esztergom, the spectacular church is well worth the 46-kilometer journey from Budapest. Set overlooking the Danube River on Castle Hill, this impressive Catholic church was built in 1507 and is not only the country’s biggest religious structure, it’s also the tallest, with its huge dome stretching 100 meters into the air. 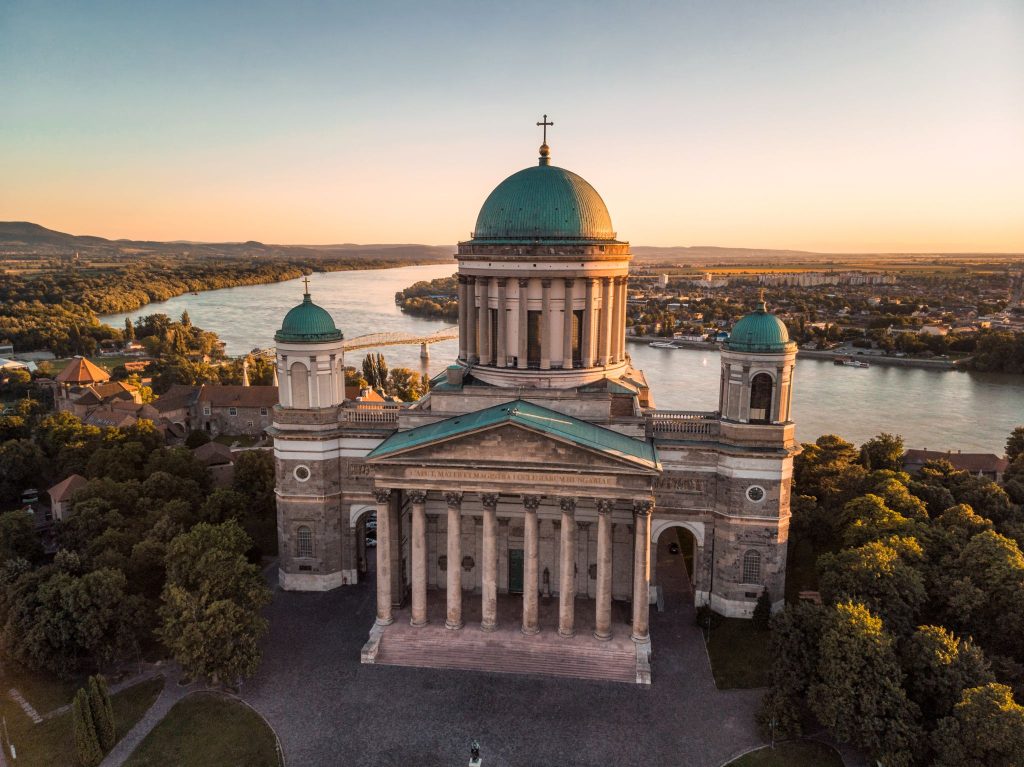 Sopron: Established in Roman times, Sopron has been both an Austrian and Hungarian city over the centuries. The local population refused to cede to Austria following a request which was made as part of the treaty of Trianon. The majority of citizens who took part in the vote choose to remain loyal to Hungary, therefore the town remained part of Hungarian territory, and earned the name “Most Loyal Town.” The Gate of Allegiance honors this act. It is located on the main square next to the city landmark Firewatch Tower. 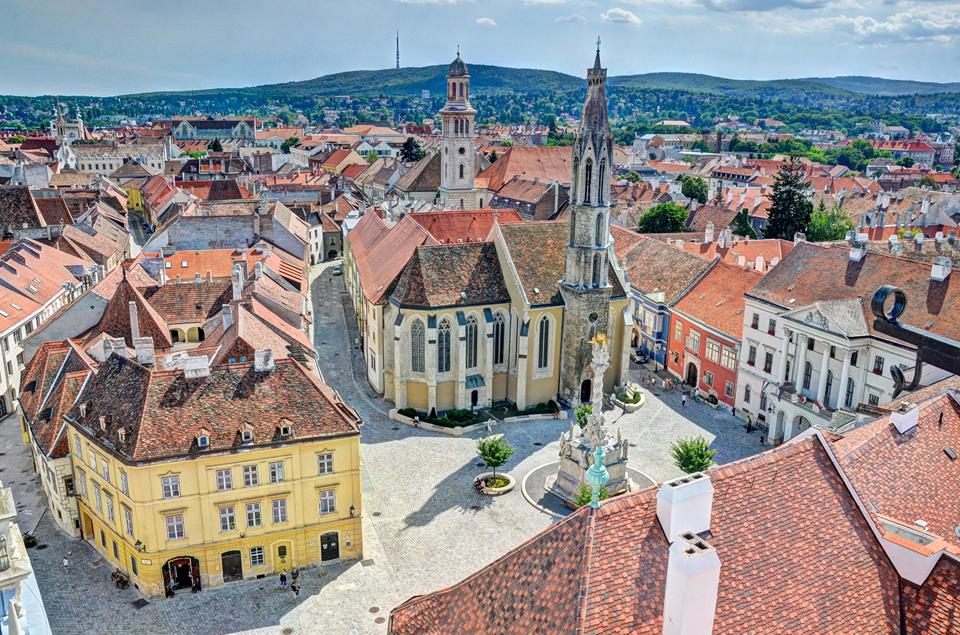 Pécs: Home to the first university in Hungary, founded in 1367, Pécs has been ruled over by Romans, Christians, and Ottomans. A mild climate, magnificent museums, medieval buildings and fine wines make Pécs a popular travel destination. Historic religious buildings are a big draw, including the Cathedral, Széchenyi Square, Synagogue and Mosque of Pasha Qasim.

Lake Balaton: People often refer to it as the “Hungarian Sea” and is a popular spot during the summer months. Central Europe’s largest lake offers many opportunities to spend your free time meaningfully. Discovering the charming towns and villages (e.g. Siófok, Balatonfüred, Tihany, Keszthely, Csopak, Paloznak, Badacsony region) around its border can be great fun. Since Balaton is a wine region, there are plenty of splendid wines to explore in the local restaurants, bars and wineries. If you are keen on doing sports, you may rent a bike and cycle around the lake or take a swim. 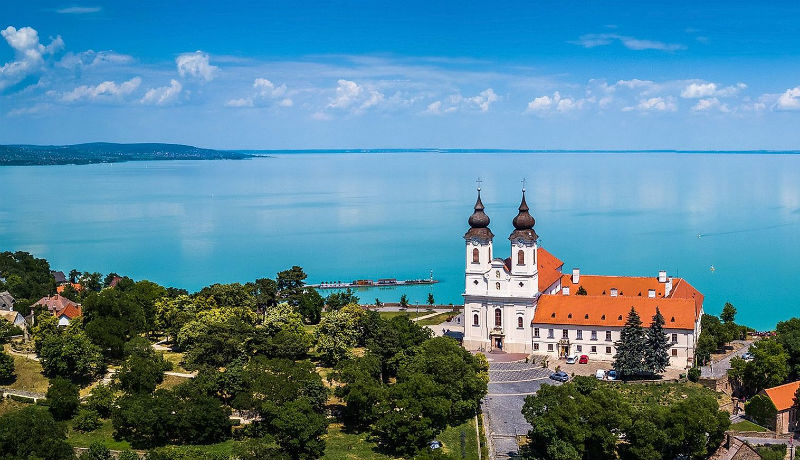 Szeged: It is the third-largest city in Hungary and known as “the city of sunshine” for its brilliant weather, and for the imposing cathedral, a wealth of Art Nouveau and historicist buildings. Szeged’s Open-Air Theatre Festival held in the summer attracts people from all over Europe. Szeged is also famous for its gastronomy; its delicious fish soup is known all over the world. One of the main attractions of Szeged is the River Tisza, that offers possibilities to do different water sports or boat trips. 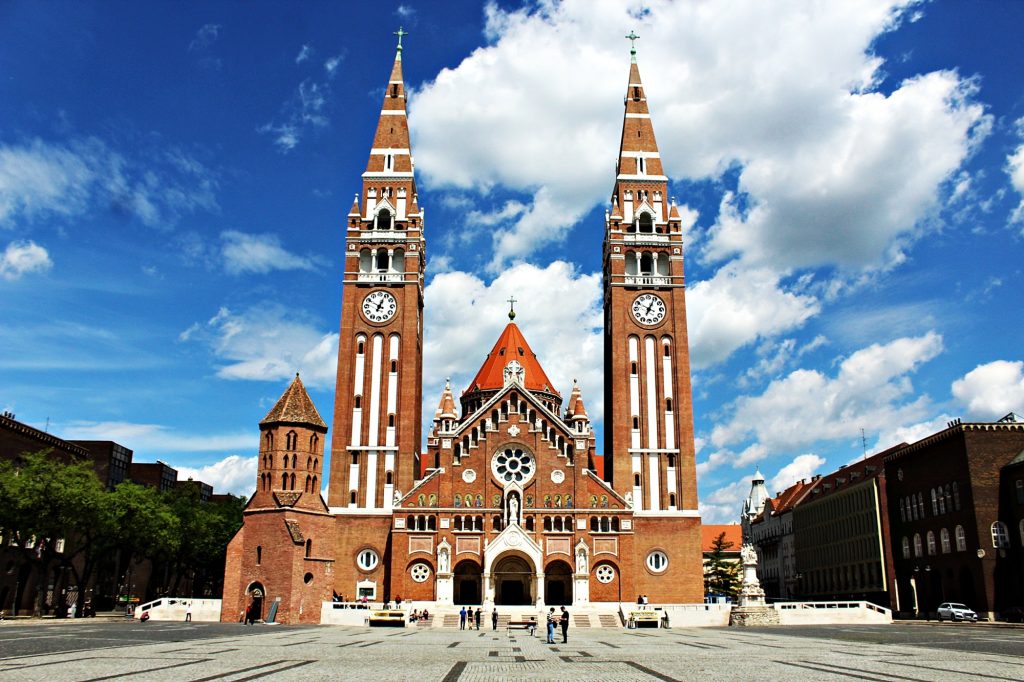 Hortobágy National Park: It is the country’s largest protected area and Europe’s largest semi-natural grassland, with the alkaline steppe dating back 10,000 years. Animals, including wild horses, lived on the steppe during the Ice Age. Horses, as well as cattle, oxen and water buffalo, still graze on the land. It’s a good place to go bird watching, since 342 species live in the park. A key attraction is the Nine-Arch Bridge that was built in the mid-19th century for people needing to cross the heavily flooded grasslands.

Debrecen, which served as Hungary’s capital various times over the century, is an important cultural center. Heavily destroyed during World War II, Debrecen is considered the intellectual center of the country, starting with the founding of Calvinist College in 1538. Now known as the University of Debrecen, the college is famous for its architecture. Top attractions include the Reformed Great Church, the largest Protestant church in Hungary; the Déri Museum with its collection of ancient Egyptian artifacts, and the annual Flower Carnival. 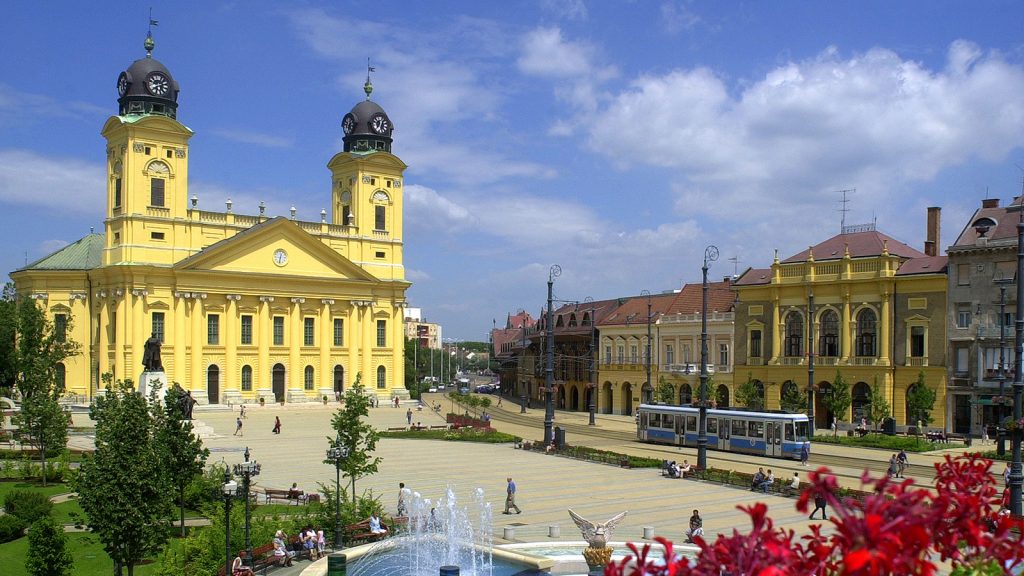 Eger is best known for its castle, Basilica, thermal baths, baroque buildings, the northernmost Ottoman minaret, dishes and red wines. A famous sight is the “Valley of the beautiful Woman”, where plenty of wine cellars and restaurants are built into the surrounding hills, it is a great place to try out the iconic red wine, called “Bull’s Blood”. 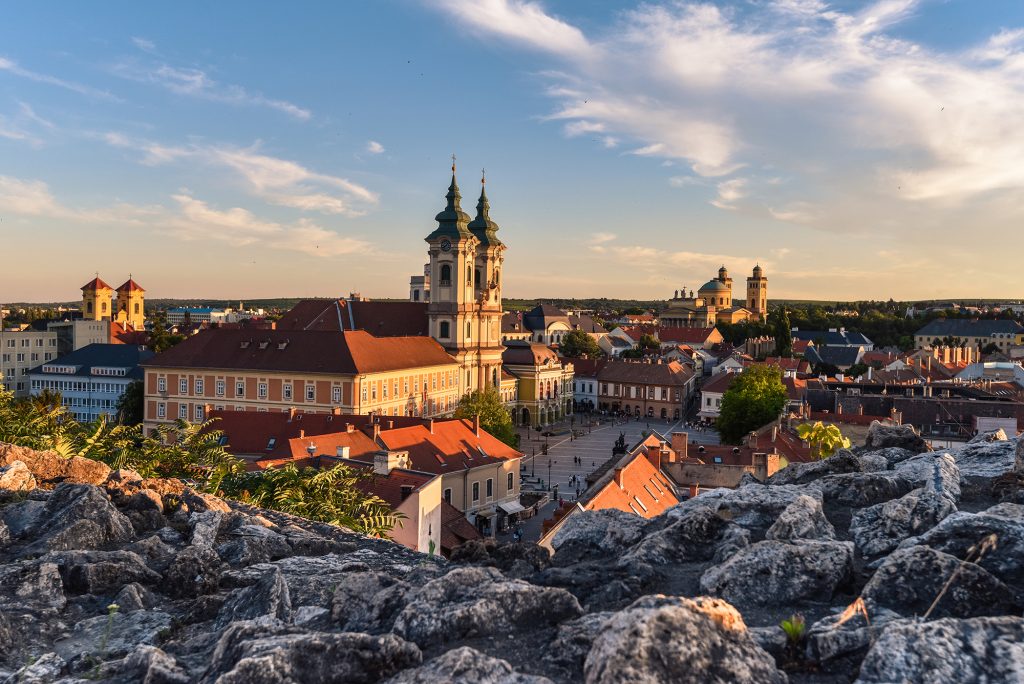 Aggtelek National Park: The park is home to the largest stalactic cave in Europe and covers almost 200 square kilometers, much of it also protected as a UNESCO World Heritage Site. The Baradla Cave stretches for more than 25 kilometers, with a seven-kilometer-long main tunnel. Its passages were formed over thousands of years as rain and melting snow eroded away the limestone, with dripping mineral-rich water forming giant stalactites and stalagmites in fantastic shapes and bizarre colors. 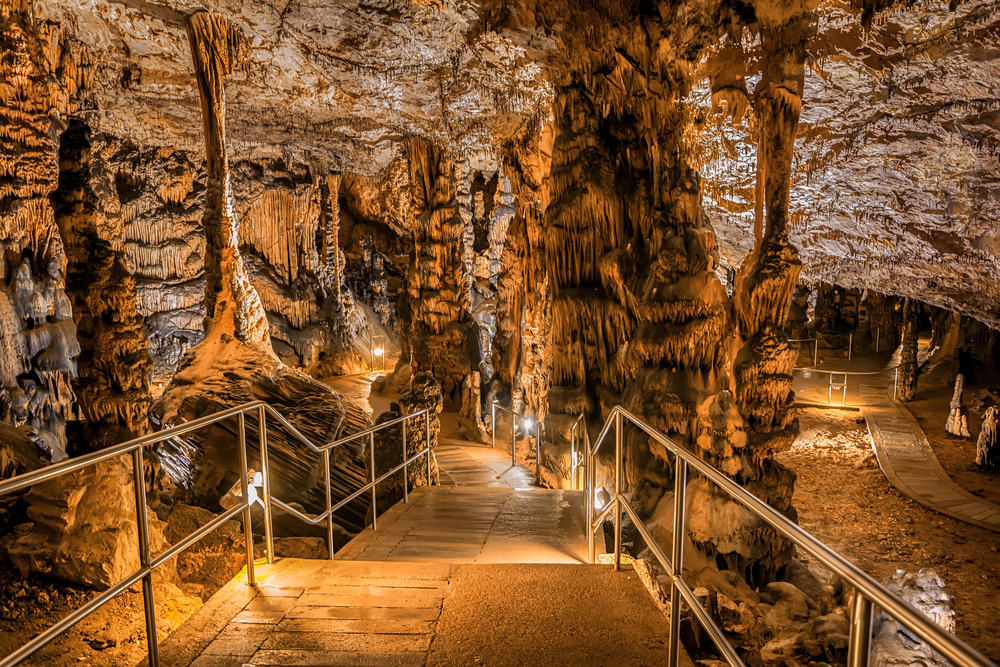 Tata: Tata is located in the valley between the Gerecse Mountains and Vértes Mountains. It is called the “City of Living Waters” and in 2010 it became the capital of biodiversity in Hungary, thus acknowledging the city’s attachment to natural values. The Old Lake is located in the middle of Tata, on the shore of the lake lies Tata Castle and next to the castle is the Esterházy Palace. Watermills are pretty common in the town, hence its watercourses. 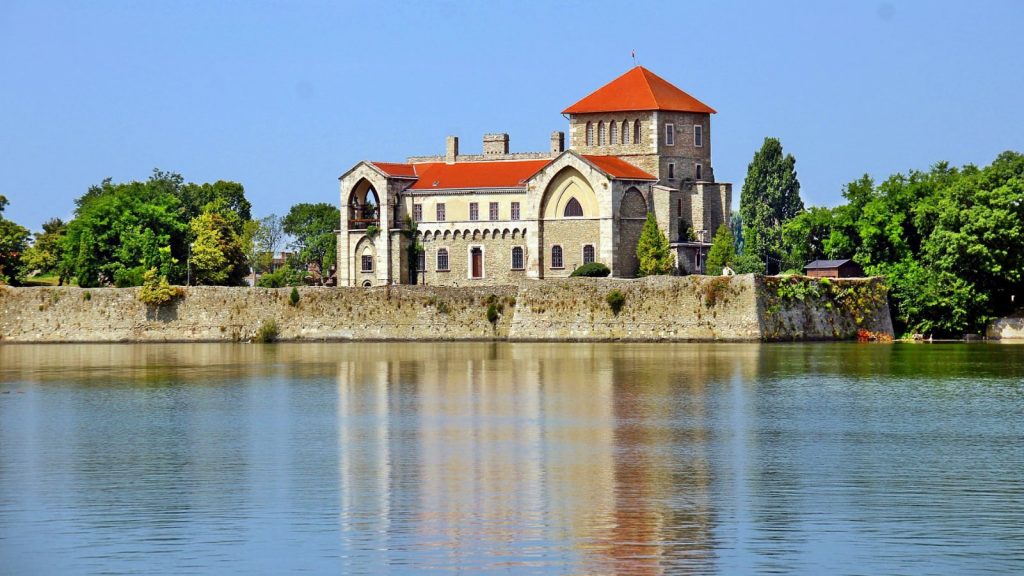 Tapolca: Several excavated caves in Tapolca form a common system, making it the fourth longest cave system in Hungary. This 3 km long lake cave system is situated in the heart of the town and mostly filled with karst water. Small boats can be hired to explore the cave system. A romantic part of the town is the Mill Pond (Malom-tó). The Upper Pond can be reached from the Main Square through a small backyard where the “Four Seasons”, a sculpture by László Marton, is situated. 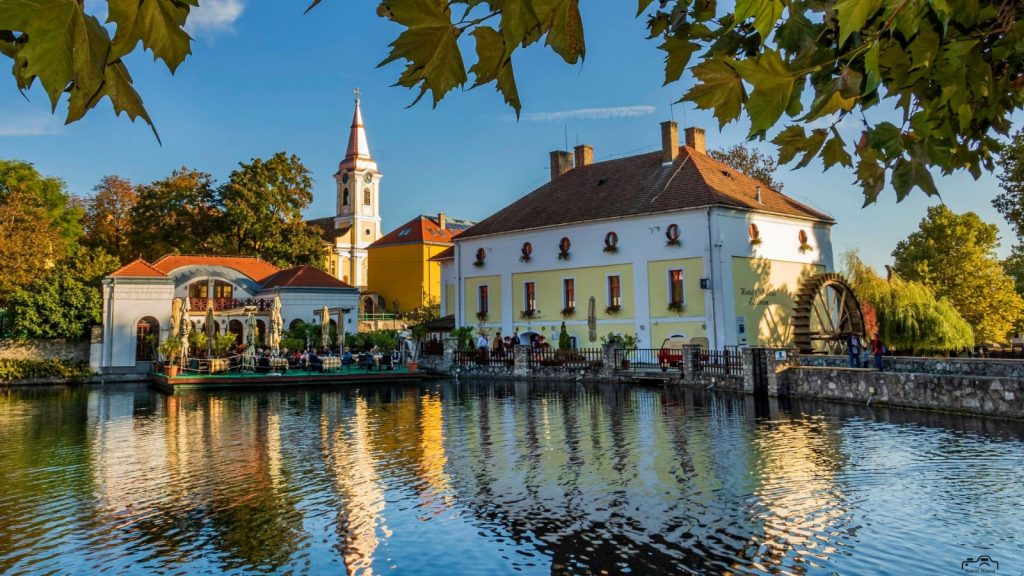 Kőszeg is situated on the Austrian border, at the foot of the Alps. Kőszeg is often called the „Jewel Box of Hungary”, thanks to its historical monuments, sights, architecture and famous places. Established in Medieval times, Kőszeg is a great example of how German and Hungarian citizens could live together in harmony for over a few hundred years. Mostly hills and forests make up the surrounding areas. The main sight of the hills is Írottkő Lookout tower (883 m). This building is unique, as one part of it belongs to Austria, while the other stands on Hungarian territory.

Rudabánya: Its past is closely linked to mining, as the name of the town suggests. There is a popular mine-lake there, which color is aquamarine, it is a truly mesmerizing sight to visit. It is also the site of Rudapithecus hungaricus (also known as Dryopithecus brancoi), a great ape that lived 8-10 million years ago. 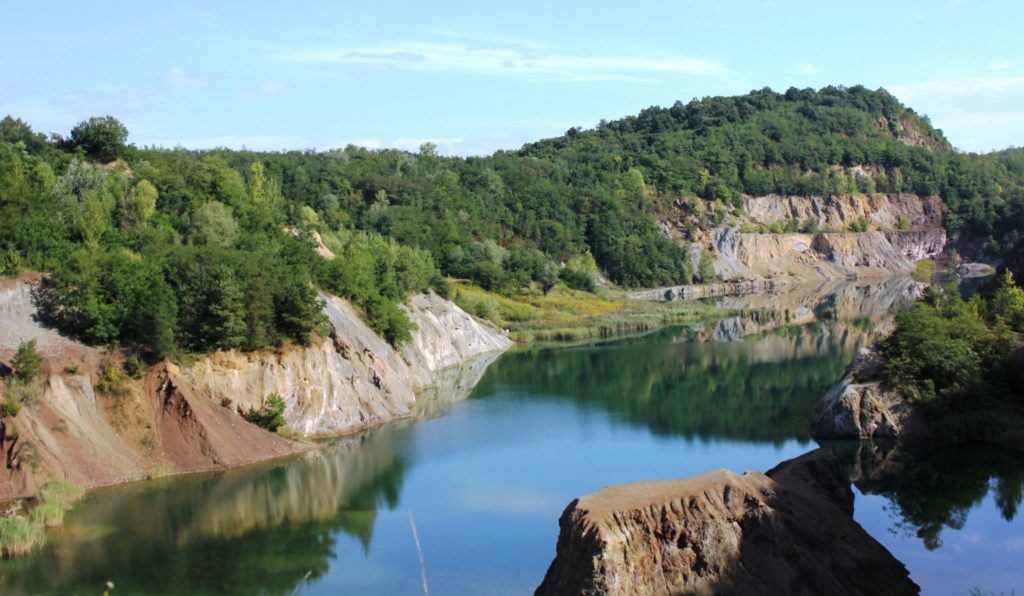 Veszprém: According to legend, Veszprém was founded on seven hills. The historic centre of Veszprém is the castle, which – together with the surrounding towns – was one of the significant centres of Hungary, until the Turkish occupation: it was the King’s and Queen’s seat and an episcopal seat. The most famous sights are: Fire-watch tower, Holy Trinity Column, Castle Hill, Castle Gate and the cathedral.

Hollókő is a Palóc ethnographic village in Hungary and a UNESCO World Heritage Site. It lies in a valley of Cserhát Mountains, surrounded by low peaks. The natural environment is protected. Sights worth visiting when traveling to Hollókő: Hollókő castle, St. Martin Roman Catholic church, Village Museum and the protected part of the village.

The Ópusztaszer National Heritage Park is an open-air museum of Hungarian history in Ópusztaszer, Hungary. It is most famous for being the location of the Feszty Panorama, a cyclorama by Árpád Feszty and his assistants, depicting the beginning of the Hungarian conquest of the Carpathian Basin in 895. The painting was completed in 1894 for the 1000th anniversary of the event. The park is also home to various indoor and outdoor exhibits, focusing on the archaeological and ethnographic history of ancient and early-modern Hungary in an immersive and engaging manner.

The Rám Gorge is located between Dömös and Dobogókő in Visegrádi Mountains. A 7-km-long trail connects the two possible entry points with around 1 km in the gorge itself. It is one of the most popular hiking destinations of Hungary, where hiking is combined with adventure: to complete the route you need to climb up and down on leathers, ropes, stairs while balancing on rocks and narrow trails in the area. The gorge has a volcanic origin which means that this fantastic natural area was once the “home” of an active volcano.

Kékestető is Hungary’s highest mountain, at 1014 metres above sea level. It offers a multitude of unique experiences all year long for those who enjoy hiking, active relaxation or just want some rest. The highest point in Hungary provides an excellent opportunity for both individual and organized visitors to admire the panorama of the Mátra and enjoy the special climate of the highland spa.

Hévíz is a spa town located near Lake Hévíz, the world’s second-largest thermal lake, but biologically the biggest active natural lake. Its temperature is affected by the combination of hot and cold spring waters, coming from 38 meters underground. The water breaks out from a spring cave, at approximately 410 liters per second, with a temperature of 40 °C.

Salgó Castle: Near the small village of Salgóbánya, the 625-meter-high volcanic peak of the Medvés Plateau is crowned by the castle of Salgó. This fortified tower was built by the Kacsics clan, who were the lords around these hills in the 13th century.

Somoskő Castle: It is located on the Hungarian-Slovak border, on a volacanic peak, in Slovakia. On the north side of the castle is the world-famous basalt waterfall.

For more attractions, click on the link below: https://info-budapest.com/attractions-in-hungary

Cookies must be accepted in order to continue shopping and to function properly.
By clicking on the "Next" button you accept the handling of cookies!
If you do not wish to contribute please click "Cancel"!